A new study released today reports that nearly half of California adults, including one out of every three young adults, have either prediabetes — a precursor to type 2 diabetes — or undiagnosed diabetes. The research provides the first analysis and breakdown of California prediabetes rates by county, age and ethnicity, and offers alarming insights into the future of the nation’s diabetes epidemic. 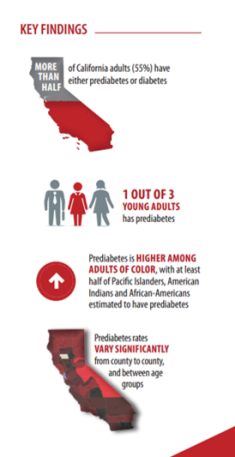 Conducted by the UCLA Center for Health Policy Research and commissioned by the California Center for Public Health Advocacy, the study analyzed hemoglobin A1c and fasting plasma glucose findings from the National Health and Nutrition Examination Survey together with California Health Interview Survey data from over 40,000 respondents.

Approximately 13 million adults in California, or 46 percent, have prediabetes or undiagnosed diabetes, while another 2.5 million adults, or 9 percent, have already been diagnosed with diabetes. Combined, the two groups represent 15.5 million people — 55 percent of the state’s population. Because diabetes is more common among older adults, the study’s finding that 33 percent of young adults aged 18 to 39 have prediabetes is of particular concern.

“This is the clearest indication to date that the diabetes epidemic is out of control and getting worse,” says Dr. Harold Goldstein, executive director of the California Center for Public Health Advocacy. “With limited availability of healthy food in low-income communities, a preponderance of soda and junk food marketing, and urban neighborhoods lacking safe places to play, we have created a world where diabetes is the natural consequence. If there is any hope to keep health insurance costs from skyrocketing, health care providers from being overwhelmed and millions of Californians from suffering needlessly from amputations, blindness and kidney failure, the state of California must launch a major campaign to turn around the epidemic of type 2 diabetes.”

Prediabetes Higher Among Adults of Color

Prediabetes is a condition in which blood glucose levels are higher than normal but not high enough for a diabetes diagnosis. Up to 30 percent of people with prediabetes will develop type 2 diabetes within five years, and as many as 70 percent of them will develop the disease in their lifetime. Diabetes is associated with dramatically increased risk of amputation, nerve damage, blindness, kidney disease, heart disease, hospitalization and premature death.

Diabetes is one of America’s fastest-growing diseases and one of the most costly. Nationally, diabetes rates have tripled over the past 30 years. In California, the rate has increased by 35 percent since 2001. Nationally, annual medical spending for people with diabetes is almost twice that for people without diabetes. A person who is diagnosed with diabetes by age 40 will have lifetime medical spending that is $124,600 more than someone who is not.

To avoid the progression from prediabetes to diabetes, the study’s authors recommend greater participation in the National Diabetes Prevention Program, as well as policy and other changes to increase screening and prevention and encourage healthy, active lifestyles.

“For most people, type 2 diabetes is entirely preventable,” Dr. Goldstein said. “If Medi-Cal covered diabetes prevention programs and every health provider screened for prediabetes, we could prevent a large proportion of cases. In exchange for a proactive investment today, we can save billions of dollars in health care costs over the next five years and beyond, and save thousands of lives.”

Read the study: Prediabetes in California: Nearly Half of California Adults on Path to Diabetes

The study was funded by the California Health Care Foundation and The California Endowment. Recommendations and materials are available at www.caprediabetes.org

The UCLA Center for Health Policy Research is one of the nation’s leading health policy research centers and the premier source of health policy information for California. The Center improves the public’s health through high-quality, objective, and evidence-based research and data that informs effective policymaking. The Center is the home of the California Health Interview Survey (CHIS) and is part of the UCLA Fielding School of Public Health. For more information, visit www.healthpolicy.ucla.edu.

Excerpted from the Prediabetes in California: Nearly Half of California Adults on Path to Diabetes press release & policy brief dated 3/10/2016.