Growing up, Saturday morning meant two things: Cartoon time, and that we were allowed to eat the sweeter cereals if available from the kitchen cabinet. The multicolored ones that changed the milk in my cereal bowl from white to pink were my favorite. Woohoo! Silly rabbit, Trix were for me too!

However soon those weekend rendezvous with the white rabbit later progressed to cereal straight out of the box as a snack after school. In time it became easier to eat it (cereal) after dinner every once and awhile if I was craving something sweet and we didn’t have any traditional dessert. A bowl of Honey Nut Cheerios with milk only has 150 calories according to the box for a serving. Sounds good, however what size is the actual cereal bowl? Does my body digest processed sugars found in cereals like it used to? How would I know? Turns out many of us with a few extra “tummy” inches to lose may not be digesting processed foods and sugar well at all and it may be making us sicker than we realize.

Looking back, I wasn’t just eating cereal, I was caught in a never-ending food cycle leading to cravings for even more sugar and processed foods. I wouldn’t realize this until years later while planning The Miseducated Dieter series. Saturday morning cartoons were just the beginning.

I was already hot on the trail of Gatorade since January 2016 when I learned that the sports drink company (a subsidiary of PepsiCo) was testing products on student athletes at an elite boarding school here in the U.S. While I was also a competitive student athlete in high school, the notion seemed absurd. And honestly, sorta criminal. How was this allowable? 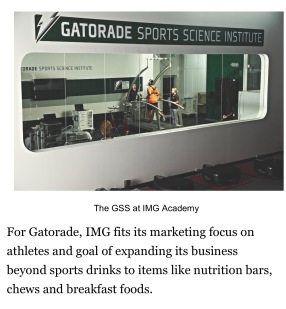 When I forwarded the article out over Twitter, less than an hour later I received other links to Gatorade’s campaigns to market into schools and across gaming devices. Let’s be honest, what percentage of kids drinking Gatorade are performance athletes?  And even if that percentage was higher, is Gatorade what they should be drinking? The whole, “at least it’s better than soda” myth isn’t holding up anymore. When kids get hooked on sugary drinks, they want more of them – leading to increased cravings for other unhealthy foods as well. That’s fantastic news for the food industry, while life-threatening to our children and families.

While working on this very post, my daughter was watching YouTube videos on Star Wars (she’s a die hard fan) and just before moving on to the next clip she came across a new ad from Gatorade.

Released in December, it opens with a young African American boy (looking to be the same age as my son) with a basketball sitting on the couch in his home. You can overhear what appears to be his parents arguing. He leaves the house and he’s called after by what may be street hustlers or drug dealers (the audience is left to draw conclusions.) The young boy is moving through an inner city neighborhood of Chicago and soon we discover that the little boy is none other than NBA all-star Dwyane Wade. We learn he’s returned to play for the Chicago Bulls and he’s giving back “hope” to his community now that he’s back in his hometown. Thanks to and presented by Gatorade.

The powerful imagery throughout the video is guaranteed to resonate with aspiring hoopsters across America – especially our youngest players from urban cities. Thing is, we watch athletes at the top of their game endorse products which aren’t the healthiest for us, but do we ever see what happens to them years later?

NBA all-stars Dominique Wilkins, Patrick Ewing, and Isiah Thomas a generation before Dwyane Wade once promoted the official soft-drink of the NBA as well. Then it was Minute Maid Orange Soda by the Coca Cola Company:

Now retired, Dominique Wilkins seen above is a spokesperson for Victoza, a diabetes medication. (If you make it through the extensive list of possible side-effects, give yourself a gold star.)

There was a time when I didn’t understand fully the dangerous messaging inherent within these ads targeting children of color.  I too was once a young basketball player – my heroes at the time were Magic Johnson and Michael Jordan. If they drank Minute Maid Orange, then it must be the real deal. I didn’t know anything about celebrity endorsements and targeted marketing strategies by corporations like Coca-Cola and PepsiCo. I learned that after college when I spent six years in the advertising division for a publishing company. We know these drinks are filled with sugar. Meanwhile the food industry is permitted to target communities with the highest percentages of Type 2 diabetes both here and abroad.

It’s Not About Willpower

The food & beverage industries spend billions annually to influence our diet patterns with strategically placed advertising on television, in supermarkets, our schools, the neighborhoods we live in, and now cleverly through gaming and social media.

When unfamiliar with the external factors impacting (if not promoting) the obesity epidemic among our most vulnerable population – children, we leave room for the industry to shift blame and responsibility back to parents, schools, and kids themselves.

Center for Science in the Public Interest (“CSPI”) and Healthy Food America are two of my favorite nonprofit organizations fighting food industry tactics online via social media. They both offer breaking news on health issues affecting our country, and often participate in #FoodFri (Food Friday) Twitter chats where community organizations, parents, educators and advocates can follow one another and share resources on topics like sugary beverages being marketed disproportionately to children of color or how the supermarket is rigged to promote secret deals with food manufacturers.

Other organizations like Berkeley Media Studies Group work with health advocates to practice media advocacy — the strategic use of mass media to advance policies that improve health. I highly recommend checking out their site if interested in getting more active with promoting nutrition education and health literacy.

“America’s beverage industry is determined to crack the code on how to help people reduce their sugar consumption from beverages by promoting smaller portion sizes, water and other lower-calorie beverages.” Susan Neely – American Beverage Association President and CEO. (This quote was included within the press release for A Partnership for a Healthier America’s “Drink Up” campaign launched in East Los Angeles in December 2016 to promote increased water consumption.)

According to their Delivering Choices website, “America’s Beverage Companies are providing information, options and support to make getting the right beverages for a balanced lifestyle even easier. We’ve also launched a national initiative to talk to teens about the importance of balancing foods, drinks and physical activity. We’ve removed full-calorie sodas from schools and our new goal to cut beverage calories consumed per person by 20 percent by 2025 is the single largest voluntary effort by an industry to help fight obesity…”

Wonderful. So does this mean they are also cutting back on advertising their sugar loaded beverages to low income communities as well through 2025? Should we expect to see less sugar loaded Coca Cola, Pepsi and Dr. Pepper ads in magazines, movies, on television, billboards and marketed across social media in order to reach that goal?

I didn’t think so.

They are going to remind us that their beverage options also include water. They aren’t going to say how much water to drink, because they want us to balance drinking water with drinking other beverages like lower calorie sports drinks or their smaller sized sodas on the market. Very clever.

Here’s the problem. Most of us have tried smaller portion sizes of unhealthy drinks, and with addictive substances like sugar, cutting back only a little triggers cravings for other processed foods and drinks. For most of us, sugar in small amounts gradually becomes sugar in larger amounts over time.

Sugar in organic Gatorade will damage our bodies in same ways as sugar in regular Gatorade. https://t.co/1NEms2Qkxm pic.twitter.com/JQzqDbl4Hb

Fortunately, public health advocacy organizations and universities across the country are highlighting the messaging and tactics from the food and beverage industry aimed at our kids, also providing resources and tools for parents and community advocates to stay informed.

Learn more about some of the latest practices and interventions to keep children and their families healthier:

The Miseducated Dieter page on Facebook is a community-driven social forum established to identify some of the conflicting news on all things “dietary” — the forum also highlights books, articles, inspiring quotes, and helpful resources to combat the growing influx of misinformation on what makes for “healthy” eating and active living across the globe.