Exercise Matters – But Does it Effectively Promote Weight Loss?

You’ve probably heard those guidelines as the simplest requirements for achieving weight loss. But they also happen to be the same methods which increase bodily hunger. If you aren’t convinced, try skipping a meal while adding an extra Zumba class to your daily planner. What happens? Odds are you’ll reach the doorstep of “hangry” by nightfall – feeling cranky, and leaving loved ones behind as you plot your next heaping plate of food.

As a former athlete, distance runner, youth basketball coach (and veteran dieter), exercise has been ingrained into my cerebral cortex as a critical component to overall health and fitness for over three decades. The many benefits of exercise include improved muscle and bone strength, cardiovascular health, and better sleep, while also reducing risks of some cancers, diabetes and other metabolic disorders.

But increased exercise is also heavily promoted as an effective weight loss tool.  The commercial forces behind the dieting and exercise industry are far bigger than we realize. While dieters across the globe remain largely stigmatized for lack of willpower and faltering commitment to physical activity, the market for sporting goods in the United States had a projected value of more than 63 billion U.S. dollars in 2014. With more than two-thirds of the U.S. population either overweight or obese, our approach to weight loss exercise is clearly missing the mark.

Is the majority of our population truly incapable of getting off the couch, or have we been miseducated on how to best incorporate exercise when looking to shed pounds?

You Can’t Outrun Your Fork 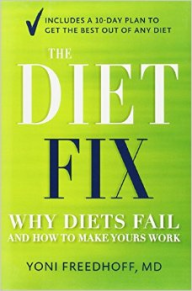 “Exercise is the world’s best drug, it’s just not a weight loss drug,” says Dr. Yoni Freedhoff, MD founder and Medical Director of the Bariatric Medical Institute, and Assistant Professor of Family Medicine at the University of Ottawa. “Exercise should never be undertaken in order to lose weight as the calories burned through exercise aren’t enough to be fair and people often have a bad habit of eating back their exercise.” Renowned as Canada’s most outspoken obesity expert, his book The Diet Fix, Why Diets Fail and How to Make Yours Work, also addresses key missteps individuals are making when it comes to exercise and weight loss. Sabotaging our workouts with added calories is perhaps weight loss enemy number #1.

We’ve all been there, reaching for that extra-padded food serving at the dinner table, “because we exercised” – or perhaps splurging on the 300+ calorie fruit smoothie immediately following spin class. On the surface these minor indulgences may seem harmless, but they often cancel out the calories expended during a workout. Part of the challenge with incorporating exercise into a “weight loss” regimen is overcoming our own tendency to undermine our time spent exercising with our forks.

“That doesn’t mean exercise doesn’t play a role in weight management,” says Freedhoff, “It’s just that exercise alone, or exercise undertaken to compensate for an indulgent diet, is almost certain to fail. Overexercising is as much a risk to dieters as undereating.”

Another key error we may be making when it comes to accomplishing our weight loss goals is the belief that success can only be reached through extreme discomfort. No pain, no gain. I asked Dr. Freedhoff why he believed the “suffering” model to promote weight loss was so prevalent. “It’s what we’ve been fed forevermore. It makes intuitive sense of course, it’s just that temporary efforts only yield temporary outcomes. In this day and age, sadly, the message is amplified by idiotic TV shows like The Biggest Loser which suggest suffering is the ticket to the weight loss express. I guess it is, it’s just that train is for most folks, a circular route where regain once a person decides they’ve had enough suffering, is often quite rapid as well.”

In 2015, former Biggest Loser contestants Suzanne Mendonca and Rulon Gardner went on record stating how the show’s weigh-ins were rigged and the extreme measures to make goal included eating baby food, spending 6-7 hours in saunas and competing with stress fractures. Mendonca added that NBC hasn’t staged a “reunion” show, because the majority of contestants have gained the weight back. 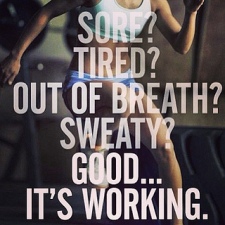 In The Diet Fix, Freedhoff explains that many people misbelieve that exercise, an incredibly enjoyable and healthful behavior, must be taken to extremes if excess weight is a problem. However our best weight loss intentions are thwarted if we start off too aggressively with an exercise program. We may burn out quickly because the routine isn’t realistic enough to maintain beyond the first few weeks. Either we are exercising to the point of needing additional calories to satisfy increased hunger, or sooner or later our bodies can’t keep up with the wear and tear.

The psychological effects aren’t to be overlooked either. Rather than reassess whether the approach to exercise as a weight loss tool should be adjusted, many are instead internalizing the belief that they are failing when it comes to their personal fitness goals. These negative feelings increase the risk of ditching exercise altogether.

How to Support Weight Loss Through Exercise

There’s a distinct difference between exercise being one of the most important tools to keep us healthy, and looking to exercise to promote weight loss. Here are a few quick tips for incorporating exercise into your health and wellness goals whether you are just getting started or returning to the gym:

1. Set Realistic Expectations For Your Exercise Regimen. Exercise is crucial for weight control, but it’s far better utilized to prevent added pounds than it is to lose them. “Whether it’s a five-minute walk outside, a few minutes of weeding, dusting off your treadmill, or time spent intentionally engaging in physical play with your children or grandchildren, what’s important is that you mentally acknowledge the importance of exercise to your health and at the same time, the importance of not biting off more than you can chew,” says Freedhoff. Ask yourself whether your targeted physical activity is something you can reasonably incorporate and maintain within your lifestyle.

2. Recognize “No Pain No Gain” is a Myth. Suffering toward weight loss isn’t mandatory nor is it productive to long-term weight loss goals. Choose an activity that’s enjoyable. If just getting started, returning from injury, or even repelled by the notion of breaking a sweat on purpose, determine what Dr. Freedhoff describes as a “toothbrush level” of daily physical activity you can commit to.  In other words, what amount of exercise could you add to your day regardless of likability? “And then, as with brushing your teeth, figure out when you are going to do it.”

If you are looking to boost exercise to achieve your weight loss goal faster there are plenty of programs on the market to try and get you there. Just keep in mind short term “boot camps” and 90-day TRX programs may also produce short term rewards that won’t last beyond being able to sustain the intensity of those workouts. In other words, make sure your big-picture fitness plan doesn’t come with an end date. Freedhoff’s exercise mantra written for The Diet Fix is an easy one to remember, “Some is good, more is better, everything counts…”

3. Remember to Balance Nutrition and Exercise Accordingly. Exercise should only account for 20% – 30% of your weight loss strategy.  Mindful healthy eating is far more critical to losing weight. Freedhoff offers an excellent analogy for simplifying the nutrition/exercise balance for weight loss. “I don’t know about you, but if I had a final exam where the questions were to be weighted 70 to 80 percent in favor of one semester’s material, I’m pretty sure that’s the semester I’d be giving the vast majority of my study time and attention. To put this another way: it’s far easier to lose weight in your kitchen than it is to lose weight in your gym.”

If weight loss is your objective, identifying a daily food and exercise plan that works for you is key. Once you’ve found a program that’s sustainable (not too restrictive, also satisfying) – be sure to look to exercise as a way to promote health and overall fitness beyond a special event, pant-size or number on the scale.

To learn more and stay connected with Dr. Yoni Freedhoff, subscribe to his blog Weighty Matters.

Exercise Matters – But Does it Effectively Promote Weight Loss? –  from the “Confessions of a Miseducated Dieter” series hosted on Literatigurl.com. Each post covers a specific topic inviting readers to reevaluate how they can improve their personal health, with opportunities for sharing information learned with others at home, in the classroom, their community or online through social media.

(Biology & Obesity): Always Hungry? – A Dietary Prescription for Fat (Science) from Dr. David Ludwig. An inside look on taming hunger, conquering cravings, and creating the internal conditions for weight loss to occur naturally. “Despite 40 years of telling people to eat less and move more – the obesity epidemic has skyrocketed. Which leaves us with one of two possibilities: the general public has lost its moral fabric and no one can control themselves anymore – or our fundamental way of thinking about it is wrong…” 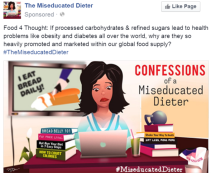 The Miseducated Dieter page on Facebook is a community-driven social forum established to identify often unknown or conflicting news on all things dietary. The Miseducated Dieter highlights books, articles, inspiring quotes, and other helpful resources to combat the growing influx of misinformation on what makes for “healthy” eating and active living across the globe. (March 1, 2016). “Like” the FB page to stay connected with updates and resources.