The Mexican premiere of Queen of Katwe will be held at the 2016 Morelia International Film Festival on October 22, 2016. Photo credit: Edward Echwalu – Queen of Katwe, Copyright 2016 Disney Enterprises Inc.

“You belong here…” Tears rolled down my cheeks during the opening scene from Disney’s Queen of Katwe as coach and missionary Robert Katende (David Oyelowo, Selma) reassures young Phiona Mutesi (Madina Nalwanga) that she is ready for the chess match that would prove to make her an inspirational icon for her country of Uganda.

Based on the 2012 book, Queen of Katwe: A Story of Life, Chess, and One Extraordinary Girl’s Dream of Becoming a Grandmaster by Tim Crothers – Katwe is described as the largest of eight slums in Kampala, Uganda and “one of the worst places on earth.” Raw human sewage is dumped directly into Katwe and there is no sanitation service. Wild animals run the streets, and makeshift shacks are what many children and their families call home until flood season.

So how on earth can a place like this produce a young girl who would become a chess Master? There wasn’t even a word for “chess” in their native language. As it turns out, real-life Phiona Mutesi’s first major motion picture seen on the big screen was the one about her life.

Also starring Mexican-Kenyan Academy Award winner Lupita Nyong’o (Twelve Years A Slave) and directed by Indian-American filmmaker Mira Nair (The Namesake, Monsoon Wedding, Mississippi Masala), Queen of Katwe offers a wealth of diversity both on screen and behind it. Nair described filming as a “complete marriage of art and life” as she cast local Ugandans from Katwe to provide added authenticity to the project.

Queen of Katwe also comes with a universal message of faith and resilience to youth across the globe. “It’s an anthem for the younger generation of how valuable it is to find out what you are passionate about and put your mind and heart to that — because then you are of use in the world,” said Nyong’o at a special preview screening and Q&A broadcast online and across theaters nationwide from Los Angeles, CA. “Phiona couldn’t have known that when she was pursuing this chess that it would one day pull her family out of poverty. She also couldn’t have known that one day her story would become a larger story, in Hollywood, on a global platform, and that one day she would be an icon for her country…and a symbol of pride for her country.” 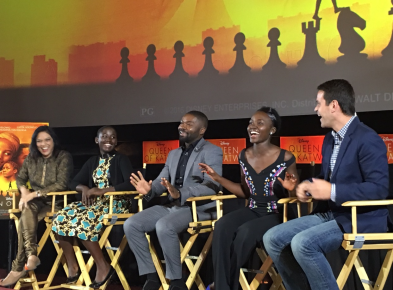 I took my daughter (15) to the Q&A and later took my father (77) for his birthday just after the film opened in Los Angeles. He grew up in extreme poverty – with racially segregated schools and public spaces in rural Arkansas in the 1940s. Like Phiona, he too was unable to attend school regularly, instead working seasonally for a sharecropper alongside his mother, brother and sister from the age of nine just to eat. (Often times they didn’t.) Watching Phiona struggle with the newfound exposure of a life better and beyond what her mother can provide her in Katwe prove to be some of the most heart-wrenching scenes within the film. 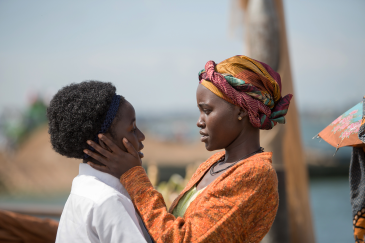 What Can Students Gain from Watching/Reading Queen of Katwe?

How many other chess champions, performance athletes, and academic scholars may be hidden away like diamonds in the rough throughout neighborhood communities across the U.S. and abroad?

Keep the Faith. Audiences young and old can discuss the messages about privilege (not everyone gets to attend school), poverty, community, faith, and determination. Films like Queen of Katwe are a great resource to inspire youth that overcoming adversity (poverty, broken families, homelessness) can and does happen. Coach Katende has his own testimony of faith that is captured eloquently within the book and makes its way over to the big screen as he inspires Phiona to believe in herself, because God believes in her too.

The Power of Mentorship. When Phiona first learns to play chess she is mentored by a girl less than half her age. Students can compare and contrast what they see in the film, with what’s happening in education – especially as it relates to impoverished communities across the globe. While the children of Katwe first join Coach Katende for free daily porridge, they stay because they are given encouragement, aspiration, and a set of operating instructions (spiritual and emotional) for navigating life’s struggles. The beauty of the story is how those life skills are taught through strategically placed pieces across a chess board.

We’re All Connected. Imagine if kids from inner-city schools in Los Angeles, Baltimore, Philadelphia and New York were asked to identify with their peers in places like Katwe. Same goes for the educators and mentors working with them.

For example, at a newly launched after-school education center in Los Angeles (The Education Center, Crenshaw/West Adams) you can find some students doing calculus level math as early as the 6th grade, and taking trips to local universities for summer instruction to plant the seed toward higher education. These children are also enclosed within a community where one third of the youth from the neighborhood are living below the poverty line, and a quarter of the adults never finished high school. Queen of Katwe reminds us that even those with very little means can access opportunities and supportive mentors so as to rise beyond the confines of their immediate environments.

Phiona Mutesi is a champion of faith and perseverance and her extraordinary story is one that should be shared all over the world. Bravo to Disney for helping make that happen.

Ready for a bonus? Grammy-Award winner Alicia Keys also wrote Back to Life, the title song for Queen of Katwe. Listen now: