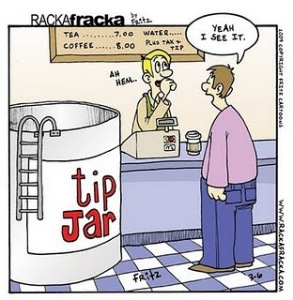 Now just wait, – this post isn’t exactly what you think it is. (Well, alright) – maybe it is a little.  What started a couple of months ago as a joke in passing at the office on all the free advice I was offering to girlfriends by a proverbial water-cooler, launched into quite the lucrative side-business where doling out “free advice” reached its tipping point (pun intended).

The result: My very own tip jar, parked for all to see, similar to those championed by Baristas appreciative of your loose change at the local Starbucks.

Not that I’m the Jedi Master of online dating, but it did in fact turn out that I’d earned quite the “blackbelt” in navigating the Tom Foolery that’s inherent within the online stratosphere of “virtual” communications and courtships.

Well, in its infancy back in 2007, I referred to myself as a grassroots anthropologist, engaging in simple research and conducting an anthropological study of the mating rituals within online virtual communities otherwise known as “chat rooms.” I’d just been hired as the executive director of Pop + Politics, a multi-person blog and a journalism training institute funded by the Knight Foundation, operating at San Francisco State University and the University of Southern California.  My mission, to reach and showcase the 18-29 year old demographic’s interest in the upcoming Presidential Election using online media. (My personal mission – navigating MySpace and Facebook to find out what all the fuss was about.)

Today, I freelance in the sport of tip-jar-coin-collecting in exchange for some of the basic do’s and don’ts when crossing over into virtual dating and initial text message exchanges. 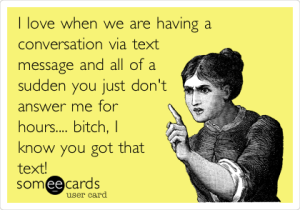 No profile picture? Forget about it.

Three lines of text on his webpage followed by one-shirtless picture and a grainy head-shot? NEXT!

Serenaded “text-messages” asserting love and trips to Europe one day?  Get back to us when the shuttle lands, bro.

While some of these flags may seem fairly obvious, learning to navigate online dating/website exchanges can be exciting and quite overwhelming — so easy does it.

As for my tip jar (and I really do have one), it’s all in good fun – just as the earliest stages of online dating should be too!