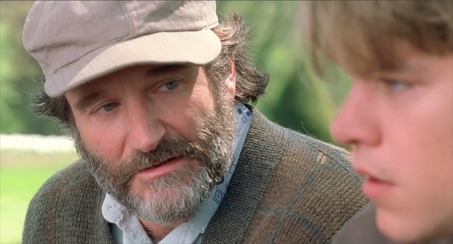 There’s so much love and sadness over the passing of Robin Williams this week. Just last night I had my first conversation with my 10-year-old son and 13-year-old daughter discussing the loss of an actor and entertainer both children knew and adored.  At first my son, Noah, wasn’t sure of who he was simply by name, to which Cami replied by rattling off several movie titles that even I’d failed to recollect:

“C’mon Noah! Robin Williams!! Teddy Roosevelt from Night at the Museum, Peter Pan in Hook, Genie from Aladdin, Robots, Happy Feet and Mrs. Doubtfire!!!”, she shouted enthusiastically.  Noah then immediately added Jumanji to the list, and right then and there I was in awe.

For me, my favorite film of his will always be Good Will Hunting for which he won the Oscar for Best Supporting Actor in 1998.  At the time of the awards ceremony I was in my first year working for a celebrity lifestyle magazine that hosted the Elton John Oscar Viewing Party at Spago Beverly Hills.  I was a mere underling “goodie bag girl” tasked with handing out the $500 swag bags to party guests at the end of the night.  In addition, two Harry Winston $25,000 diamond watches were awarded to the two guests having predicted the most Oscar wins through secret ballot submission before the ceremony started.  (Yes, I can also add Oscar Viewing Party ballot counter to my repertoire.)

The only actor I was pulling for that night was Robin Williams, and when his category was announced those of us charged with the task of ballot counting for watches we could never possibly own one day, stopped what we were doing and watched in anticipation.  Guests roared in applause that night; in some odd way I think we all felt we shared the win with him.  With a filmography including over 100+ credits, Good Will Hunting was the only Oscar he would receive.

“But why would he do that?”, Noah asked perplexed.  I simply didn’t know what to say even though the tragedy stirred emotions for me having been directly affected by friends and family with similar struggles with depression.

In addition to all of the tributes, quite a bit is being broadcast to increase awareness on mental illness and the gravity it plays in taking the lives of countless friends, loved ones, siblings, sons, daughters, mothers and fathers.  I’ve had my fair share of encounters dealing with people close to me struggling with the disease.  When I hear of yet another suicide, it eerily hits home for me as I’m sure it does for countless others affected by a very dark reality that exists in our world today.  That said, I too was deeply moved by the blog post from Williams’ daughter, Zelda – sharing her love for her father and appreciation for all the prayers and tributes in honor of a man who left way too early from this place we call life.

Having personally suffered from episodes of depression and anxiety since the age of 17, when I hear of another “early death” as I prefer to call it, it’s another reminder of my classmate’s mother who took her own life — leaving her daughter to wonder what she could have done differently, a brother of another high school friend who took his life shortly after graduating, a former coworker from my first job out of college found one morning in her car, another coworker’s sister later that same year, and the handful of friends including a former boyfriend who battle the idea of “checking out early” but are still hanging on in struggle today.

Caring for a close family member with a dual diagnosis of bipolar/borderline personality disorder for well over a decade was my closest foray into the ups and downs of this degree of mental illness.  The feelings of overwhelming helplessness in attempting to care for her, heal her, prove to her that she was loved and regarded directly in the face of constant threats take her own life was well beyond my depth.  I wanted to save her – but then one day realized that I would never have the power to do so.  One day at a time, I’ve made peace with that reality, as well as praying continuously for her recovery which may in fact take a lifetime of hard work on her part.

My daughter Cameron suggested I close this post with a quote from one of her favorite Robin Williams characters:

“But oh, to be free…such a thing would be greater than all the magic and all the treasures in all the world…” – Genie, from Aladdin

Cami then added, “People just need to find something in their own lives to make that freedom happen.”